City and Country School is celebrating its 100th birthday this year. A pioneer of the progressive school movement, it now encompasses seven brownstones and a swath of shared backyards in Greenwich Village.

Caroline Pratt, an early advocate for school reform, founded the school in 1914 as an alternative to “the [inherent] repression of formal education.” Now, a century later, the school continues to impact childhood education world-wide. For example, unit blocks, now a staple in most early childhood classrooms, were designed and implemented as a learning tool by Pratt. She was a wood-worker herself, and began her career as an educator teaching woodworking to children in settlement houses. 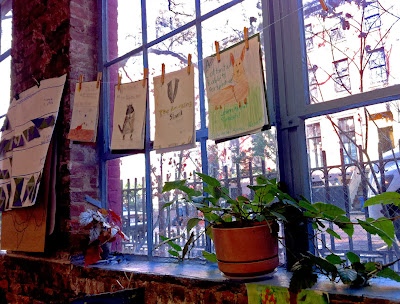 I began my visit in the VIII's (eight-year-old's) classroom. The school has a long history of referring to their "groups" (classes) with Roman numerals. The term "group," instead of "class," connotes the sense of collaboration and community that the school aspires to instill.

The teacher was guiding her students through a vocabulary and sentence structure game called "Mix-up Fix-up." Children create a sentence including a proper noun, suffix, a plural, and two of the words under study. The children were busily crafting their sentences onto strips of paper with pencil, and after the go-ahead from their teacher, finished them with marker and cut the sentences into puzzles, each piece a word or punctuation mark.

The twelve children were moving freely around their airy and light-filled room, gathering materials, conferencing with the teacher, comparing notes on their understanding of the assignment. It appeared that the students felt very at home in their room, and had claimed ownership of the space. Work that they had created covered the walls and counters. There was a wonderful degree of individualized attention and care, which is possible in schools that are able to keep class sizes small. 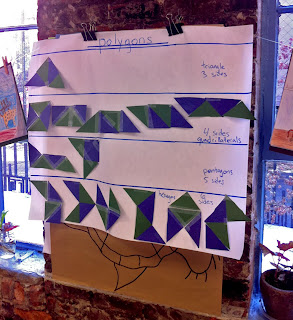 As I walked into the V's classroom, I heard a small, reedy voice with perfect pitch and articulation, singing a song I couldn't quite place: "So many times it happens too fast... don't lose your grip on the dreams of the past...." Until she got to the chorus and the five other children at her table joined in: "Oh it's the [beat] EYEEEE of the tiger, it's the thrill of the fight, rising UP! to the challenge of our rivaaal...." Their teacher jumped in to gently ask them to reflect if perhaps their singing was at a volume that might disturb a neighbor's work, and they agreed to turn the volume down.

The largest group of children was at the singing table, three others colored on the whiteboard, and another group of four worked in a massive "Block City" which occupied most of the carpeted half of the classroom. Their teachers told me that they had relaxed the academics somewhat and given more time for children to work and play freely, as it was just a few days before the winter break.

The unit blocks form a core part of their work. On Mondays, the children generate ideas for buildings as a group, and choose building partners. Instead of having to clean up at the end of each day, the children's creations stay for the week, becoming more complex as they expand. 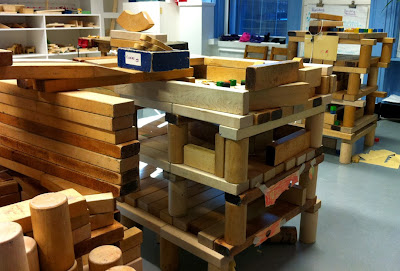 One of the Vs came over and distracted me from the Block City by asking, "Can I make you something?" She led me to the singers' table, which was covered with cardstock, paper, scissors, and colored masking tape,  and proceeded to quickly put together a pouch-like item out of paper and tape. A handful of children were busily making paper-dolls and other items; I noticed that their Block City was full of signs, creatures and objects made from paper and cardboard.

Two boys had made elaborate sword-like shapes, another a spyglass, and one girl had a set of nesting pouches (matryoshka doll style). A few girls were collaborating on a pile of wrist bands and fake money for the ice rink in Block City. Another had used a wooden bock shaped like a person to trace, cut out and fashion perfectly sized outfits. 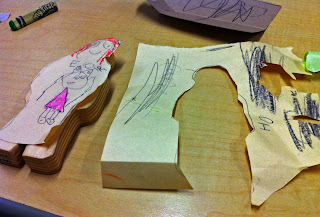 I loved the open-ended nature of this work and all of the freedom the children had to make their own toys.

The teacher sounded three chimes: stop, look, listen. The children flew through cleanup and gathered in front of the board for the lesson. I left them to it, and met up with the cheery and charming Director of the Lower School to hear a bit more about the ideas behind the work I saw in the classrooms. I learned that research on early childhood education at City & Country School was instumental in the creation of the national Head Start program, and the school continues to play a role as a research institution. They actively invite visiting educators (such as myself) to observe, and host training programs such as "Block Connection," which trains teachers to use the unit blocks across curriculum.

The feedback they hear about their graduates is that they are confident about who they are, they are excellent collaborators, they are passionate about social issues, and they are unafraid of speaking with adults. It was clear from my visits to classrooms that children are treated as equal partners in the learning process, and it follows that they would grow into self-confident and articulate young people. 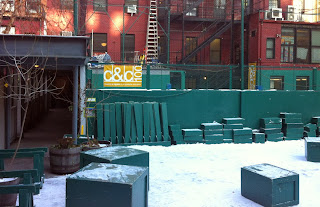 Caroline Pratt's ideas about authentic student work and open-ended learning materials are shared by many modern educational reformers. Small class sizes are critical to allowing this type of dynamic, responsive learning environment. As we as a nation struggle with school reform, we cannot neglect this basic and critical need.