Acorn Early Learning Centre is a Reggio Emilia-inspired school in Ottawa, serving toddlers through kindergarteners during the day, and children up to 12 years old in aftercare. The Reggio Emilia pedagogy was conceived in post-World War II Italy, by a group of educators and parents in and around the city of Reggio Emilia in Northern Italy, and re-imagined schools as vehicles for creating a more just and peaceful world.

Instead of organizing lessons using preplanned, static thematic units, these schools have a fluid, emergent curriculum, inspired by children’s interests and needs, organized into free-flowing long term projects that run their course over weeks or months. Teachers are collaborators, learning along with students and continually adapting the course of study to ask and answer questions along with their small charges.

The history of the Acorn school mirrors closely the method of the original Reggio system; that is, that the community of parents and educators have worked together to create an ideal learning environment for children. A dedicated group of parents hosted the teachers in their homes before one parent found their current location, and the whole adult community continues to be actively involved in improving the learning environment. Joanne, the director, discovered the Reggio philosophy and knew that she had found a model to describe the kind of education that she had been promoting for decades.

Joanne led me on a tour of the school and shared with me stories of emergent learning projects, to give me a sense of the scope of the learning process. Projects range from artistic and social endeavors that catalyze children’s incredible powers to create imaginary worlds, to very concrete, precise, science-based projects that expand children’s understanding of overlapping topics.

One project involved a turtle that a child noticed in the canal during a class’s stroll. Their teacher recognized that the turtle was not behaving normally, and contacted Turtle S.H.E.L.L., an environmental organization that encouraged them to rescue the turtle immediately: it was an endangered species, and was likely starving—the canal had been drained for the winter. Parents were mobilized, and families convened on the canal that evening for the rescue operation. Over the next year, Turtle S.H.E.L.L. nursed her back to health, and delivered weekly updates and photos to the eager kindergarteners.

Ella, as they named the turtle, sparked a feverish interest in all things turtle. The class began a study on the life cycle and environment of the turtle, which led to a study of Ottawa’s waterways, which led to a study of pollution, and our responsibility for the environment, which led to a study of water treatment facilities. They had a fundraiser to raise money for Ella’s medicines, which they donated to the organization. A teaching artist worked with the students to design and create a children’s book telling the story of their turtle. They donated a book to all of the local schools, and students from Acorn traveled to local schools to read their book aloud to other children, and answer questions about their experiences.

While the turtle project was anchored in the physical world, other projects begin with whimsy. After noticing that her students were spontaneously creating games about dragons, one teacher launched a project to investigate the Year of the Dragon, celebrating its traits of empathy and patience. Through the cultural study, the children learned that the dragon, despite appearing ferocious, is a protective force that uses its strength for the common good. The children created a larger than life dragon sculpture collaboratively with an artist parent, adding layers of meaning with each new layer of the piece.

The story of the dragon has been passed down so that she’s still a source of strength to new students at the school. Children started to bring special treasures from home that would give others “dragon power” if they needed it: earrings, stones, encouraging notes, plastic “jewels”—all of these tokens are in a bag that the dragon guards. They still come, three years later, to take a token to keep as long as they need it.

In the Reggio model, parents are respected and honored as the child’s first teacher, while the physical environment is also highly valued and referred to as the “third teacher.”  Because Acorn is a shared space, they have limited ability to alter the physical environment. However, there were shelves of plants and fish tanks or other animal pets in each classroom, a roomy play yard with structures that the children created with branches from a downed willow tree, and many wonderful toys and learning materials made by students and their families to add to the classroom, such as these hand-cut and painted building blocks. 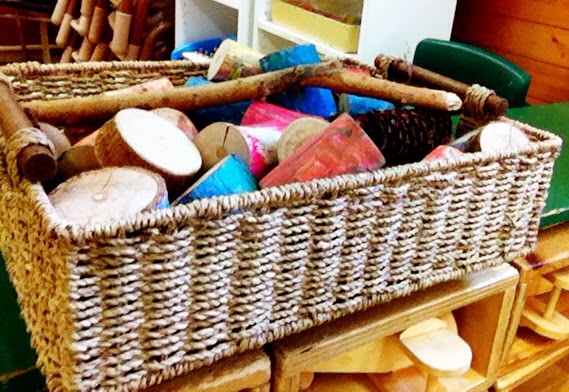 Thank you for your hospitality, Acorn!