The co-directors and founders of the Compass Centre, Abby Karos & Andre Morson, are quick to educate me on my language when I begin to ask them about their project: The teens aren't "students," they're "members." Says Andre: "We don’t call this school. We call it an alternative to school.... There’s no curriculum, no set classes, no assigning grades or checking skills-- the person responsible for that is the teens themselves. 'Do you want to work on emotional intelligence, or academic intelligence?' Neither of those is more heavily weighted." 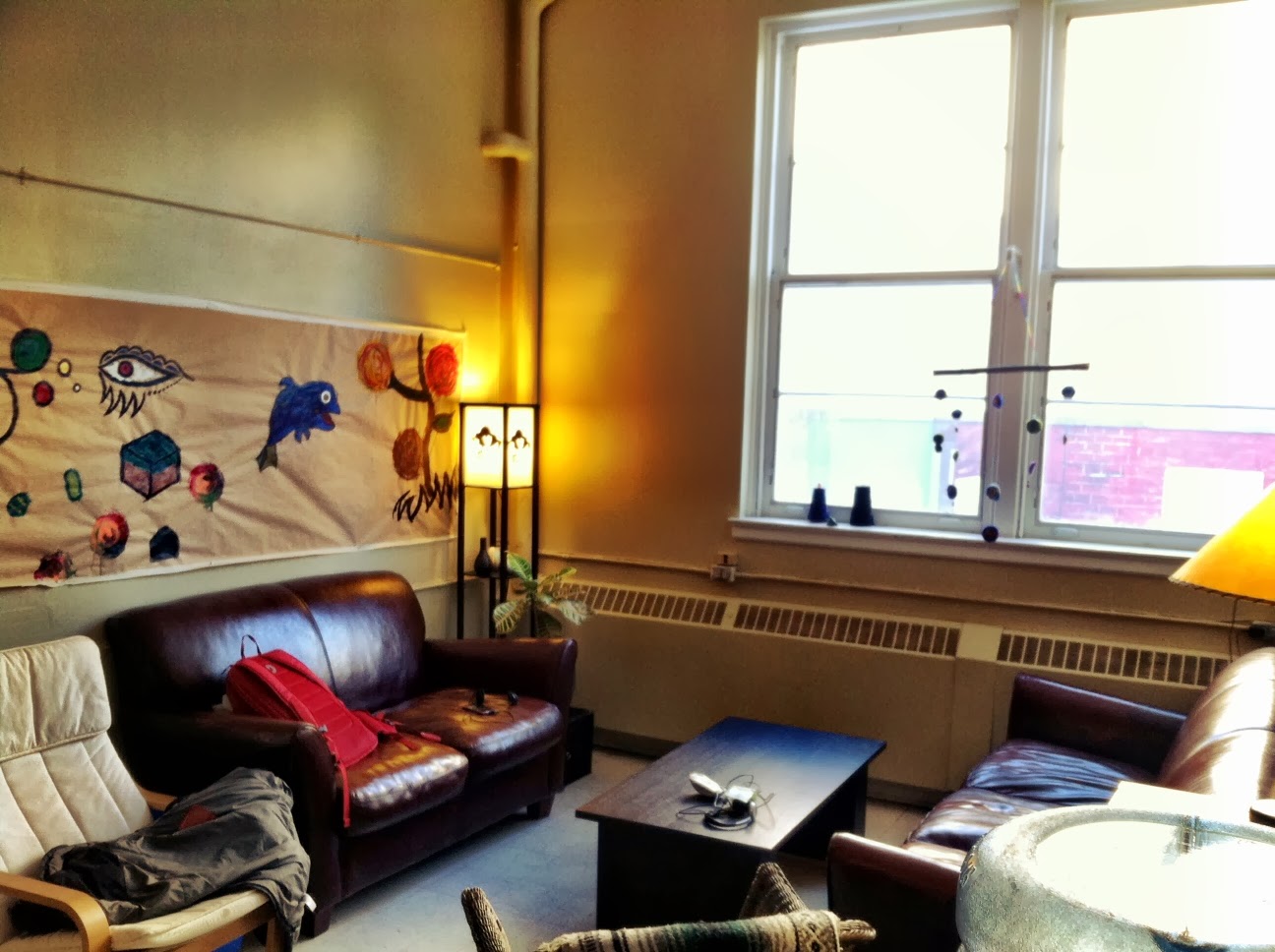 Abby and Andre started the centre 13 months ago with six teens and a small room one fifth the size of their current space. By the spring, they had 12 teens. In September, they had 15, and now it's 23, with more calls every week, through word of mouth, organizations that support teens who struggle with school, and their website. The centre works with families regardless of their ability to pay: families can volunteer, help bring in new members, assist with fundraising, and donate their abilities.

Classes are taught by volunteers, the co-directors, or the members themselves. Class options are presented at Community Meeting, and if a few teens are interested, they begin. Teens are encouraged to "vote with their feet," so after a few weeks if the attendance drops completely, they stop. If only one teen is interested in the topic, they can explore the possibility of a tutorial, or study independently. If teens express a special interest, Abby & Andrew scour the community looking for potential mentors or volunteer teachers.

Teens at Compass elect to come in between one and four days per week, and choose whether they'd like to attend classes, work independently, or collaborate. Compass never plans to have a staff of teachers: it's intended to be about what the teens want to learn, not what teachers are qualified to teach. By not paying teacher salaries, it keeps the model affordable and flexible, and allows a rotating cast of motivated teacher volunteers. 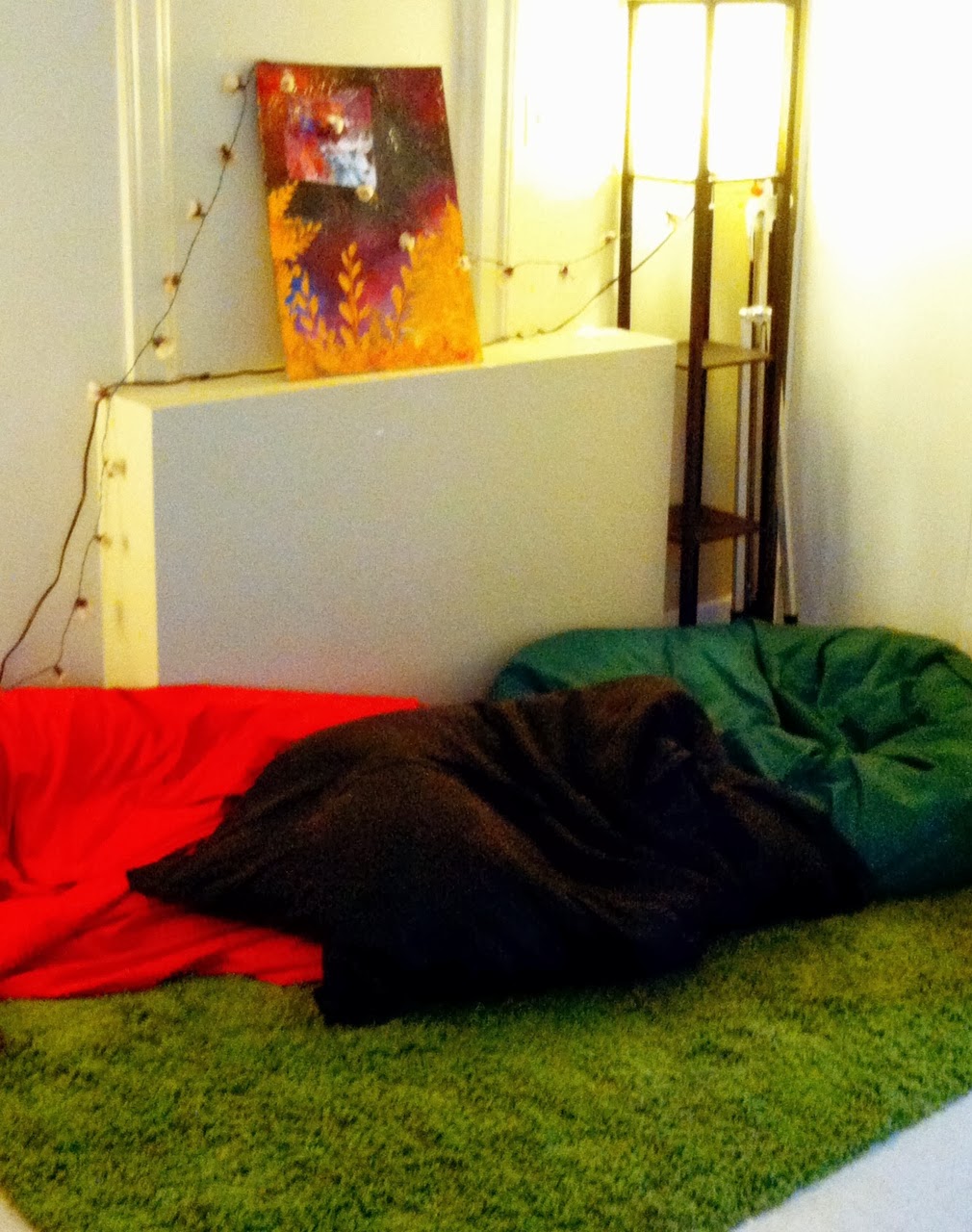 One of the volunteer teachers, Marc-Alexandre, just began a Conversational French class. “Compass is freer than a free school, but not as democratic,” he told me with a smile. And it's true: in a place like the Brooklyn Free School, children are encouraged to sign up for classes and follow through with them for their entirety. At Compass, if a class loses attendance for any reason, the volunteer teacher is politely excused from continuing that class.

Interesting content and teacher quality define the Cognitive Science class taught by Manon, a fourth year university student. Almost all of the Compass teens attend her class. She welcomed the teens into her class warmly, had a fascinating presentation cued up on a projector, and through prompting constant feedback, turned the class into a kind of choose-your-own-adventure.

After watching a TED talk on four types of memory loss, one teen volunteered that she heard that the character Dory from Finding Nemo was one of the most accurate pop culture examples of amnesia. Enthusiastic, Manon asked if they'd like to watch a snapshot of Finding Nemo to judge that for themselves. Obviously, the kids were delighted.


After watching the scene, Manon prompted them to turn a critical eye: "So, what seemed true to what we now know about real memory loss? .... Yes, once they get distracted it’s hard to get them back, that seemed right .... Yes, short term and long-term memory loss seem to be confused. Forgetting whether or not her family had memory loss, that would be retrograde amnesia, while forgetting what’s just happened would be anterograde amnesia." Completely brilliant, spontaneous, flexible teaching.

The options after Compass are exactly the same as for teens who are homeschooled: Universities want a snapshot of the last two years, and a few additional requirements. Those teens aging out of Compass and interested in continuing with higher education have all the support they need to plan accordingly, such as taking the SAT or the high school equivalency test.

Abby on higher eduction: "The more I see it here, and the more that I hear about from North Star staff [a teen center in Massachusetts off which Compass is modeled], the more confidence I can convey to parents: you really don’t need a high school diploma. It’s amazing!"

Andre continued, "It is amazing. It liberates teens from responsibilities they would otherwise have, which is important... Some teens do have the goal of going back to school. We maintain a neutral position.... We don’t hate school, we just think it’s not necessary."

And is the centre a democracy? Abby and Andre echo the words of North Star's founder & director: "This is my livelihood! I can’t have children in charge of my livelihood." That said, they have some of the trappings of democratic schools: weekly community meetings, support and encouragement of initiatives, and student choice in class offerings and attendance.

Abby and Andre talked extensively about the challenge of creating and holding space for some of the teens to go through the "detox period;" many children spend a period of time recovering from destructive patterns of previous school experiences by doing what appears to be nothing. According to the first of the core principles of the centre, "young people want to learn." What's happening during this time is recovery and growth, but it's invisible, and parents have to allow this pressure-free time so that their children don't worry that their time at Compass is tenuous. And then, all of a sudden, a teen will appear to "wake up" and start going to classes, asking questions, exploring, and thinking about their future.

I heard about Compass through Willow Johnson, an incredibly articulate, mostly self-educated teen who I met at a Humane Education conference this past fall. After being homeschooled for much of her elementary years, she stopped after a few years of high school, because, among other things, "I'm being marked on what someone else thinks is important on a test that they wrote themselves about a class that they’re teaching that I may or may not be interested in!?”

I don't want to paraphrase her eloquently described experience, so I've put a bit of our conversation, word-for-word, below.

"[At Compass,] if I’m interested in something or if it doesn’t make sense to me, I can ask, they can go in depth and answer my questions, and I have time to research it on my own time since all my time isn’t taken up with homework. I'm able to have the freedom to ask questions, even in my daily life, make note of them, because I’m not under a constant stress....

"I’m still in the process of getting out of the mindset that I have to learn certain things, produce certain things. Friends ask me “what do you do [at Compass]?” ... we’re measuring by different standards. There’s an expectation that you’re producing a certain thing. When I do write something, I feel like I’ve done it because I want to, so it’s more meaningful to me. It’s still sometimes hard to be productive when I’m still trying to figure out what I want to be doing, and how to spend my time. I spend a lot of time trying to figure that out. When I make decisions now, I’m not shaping them around school, and I think you learn a lot more when you make a decision for yourself, than when someone is making it for you."

Thank you Compass for your hospitality! Lots of food for thought, and inspiring teens!